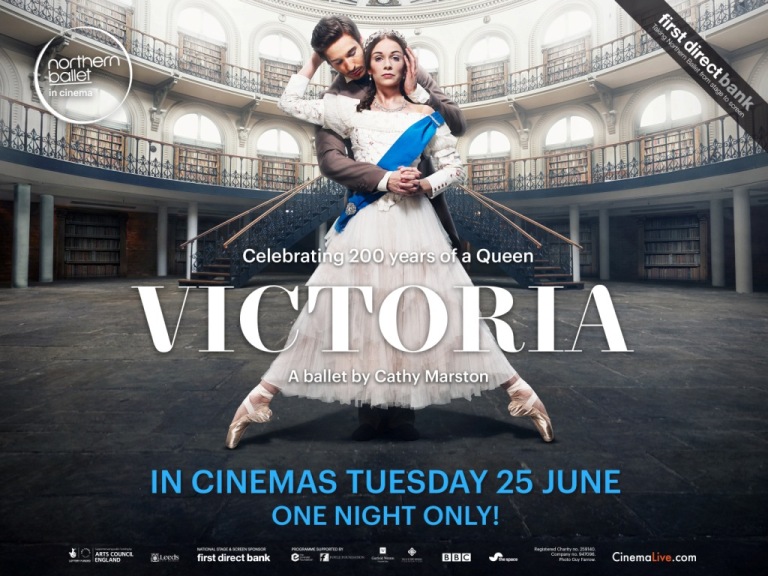 Unfortunately, due to low ticket sales, this screening has had to be cancelled.  Many apologies for any inconvenience caused.

Queen Victoria’s irrepressible love for Albert sparked a royal dynasty, but his untimely death brought the world’s most powerful woman to her knees with grief.

In celebration of her bicentenary year, Northern Ballet, famed for their outstanding narrative works, bring the sensational story of Victoria to life in dance.

Choreographed by Cathy Marston, creator of Northern Ballet’s acclaimed Jane Eyre, with an original score by Philip Feeney, this major new production reveals the often-conflicting faces of one of Britain’s most iconic monarchs, told through the eyes of her youngest child and lifelong companion Beatrice.

As her death approaches, Queen Victoria writes her last diary entry before entrusting their many volumes to Beatrice’s care. Beatrice begins reading the diaries, recalling the mother she knew from her childhood. As Beatrice remembers, the past unfolds.

A widowed Victoria lives in seclusion with her servant John Brown and young daughter Beatrice. Observed by Benjamin Disraeli, Victoria refuses to be drawn back into public life by her children but eventually she is persuaded by Brown.

Beatrice opens an early volume of Victoria’s diaries and a younger version of Victoria is revealed.

Lord Melbourne educates Victoria on her responsibilities as sovereign and shields her from the dirty politics of the opium trade before a party ensues where Victoria is presented with potential suitors. Amongst them is Albert, but Victoria evades the issue of marriage.

Later, Victoria is surprised by the change in Albert since their first meeting and is intensely attracted to him. The couple fall in love, marry and celebrate their wedding night.

Albert masterminds the Great Exhibition and a pregnant Victoria is amazed and proud. Albert juggles his growing workload with an expanding family and, burned out by the pressure of his responsibilities, he dies.

Devastated, Victoria snatches up her youngest child Beatrice, retreating with her into widowhood.

In the present, Beatrice makes peace with the memory of her mother, her task now completed.

Filmed in front of a live audience and shown on the big screen at the Electric Palace.

“A work of genuine originality and power”

The Mail On Sunday