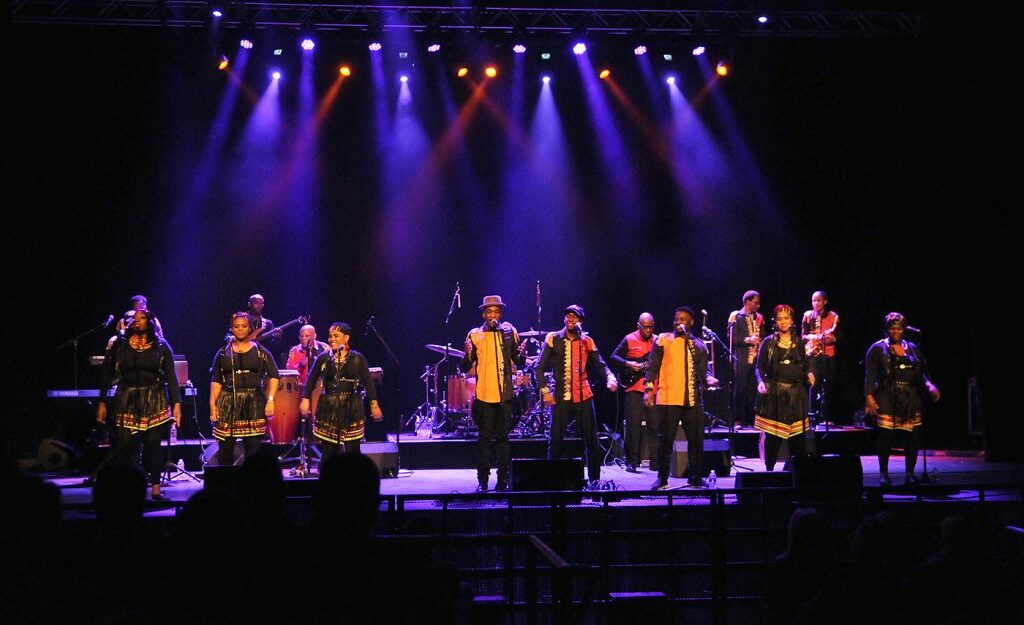 “This is where the London African Gospel Choir was born,” says founder and director Crystal Kassi.

We’ve turned off a busy SE London street into a secluded enclave ringed by trees and terraced houses, their wooden, brightly painted verandas overlooking a communal garden with seats half-hidden by shrubs. Exchange the UK foliage for palm trees and we could be in Latin America, the Caribbean or Africa.

It’s a fitting birthplace for a musical venture rooted in community and creative expression, and that’s brought African gospel out of the black churches and into the hearts of audiences worldwide.

What also sets them apart is their repertoire – a dazzling reflection of the choir’s diverse membership and that includes secular songs with a positive message.

It’s the meaning of the words that counts and Paul Simon’s Graceland – acclaimed as “one of the most iconic records in rock and roll history” on its release in 1986 – is a perfect fit with its uplifting lyrics and South African rhythms and melodies.

In the wake of Graceland’s 30th anniversary, Camden’s Jazz Café commissioned the London African Gospel Choir to perform the album in its entirety for one night only.

Tickets sold out within hours and so five more nights were added and they all sold out as well, confirming the enduring appeal of Paul Simon’s masterpiece, and also the growing excitement generated by the Choir’s string of notable stage and television appearances – some of them shared with stars like Emile Sande, Mumford & Sons, Tom Jones and the Soweto Gospel Choir, with whom they made a triumphant appearance at London’s 02 Arena, singing in front of 17,000 people.

Annie Lennox had invited them to perform at a number of prestigious events, including the MIT Awards.

They’d also worked with actor/director Idris Elba, star of Mandela:Long Road to Freedom who recruited them for an album celebrating South African music, recorded in tribute to Nelson Mandela.

The Choir has featured South African singers and dancers since its inception, and already had songs from there in its repertoire before the Jazz Café came calling.

They refer to the Graceland project as “a Godsend.” It was an opportunity for their collective talents to shine and they spent weeks learning the songs, perfecting the dance moves and putting a sparkle into their performances that’s moved many onlookers to tears.

“People have wept for joy after seeing it,” says Crystal. “They come out of the shows with Graceland in their ears, their hearts and their dreams.”

In 2002, she founded the London African Gospel Choir with the intention of spreading the gospel, and creating a platform of excellence for singers and
musicians.

Early rehearsals took place at St. Catherine’s Church in New Cross as they assembled a repertoire of mainly Ugandan, South African and African-American music, and with Crystal singing and dancing, as well as managing the group’s affairs.

Nineteen years later and she’s head of a family that sings, plays and prays together, whose motto is “Lighting up the world with a song.”

They’re joybringers, and their numbers vary since the Choir has up to twenty members who perform in a variety of aggregations, from small vocal groups to a large-scale ensemble.

Crystal’s daughter Yeelen is among the dozen or so singers and they’re all expected to learn the lead parts of every song, which means familiarising themselves with several different African languages.

Some of the singers and musicians are well known in Africa, or have appeared in West End shows like The Lion King.

The group has stars in its midst but it’s a sense of belonging and togetherness that binds them, driven by faith and respect for their fellow members.

2019 was a very exciting year for the London African Gospel Choir; they embarked on their first US tour, with shows in Boston, New Jersey, Pennsylvania and New York, toured Ireland and the UK and closed the Monte Carlo Jazz Festival.